If you have already learned something about your zodiac animal, you will know that each Chinese zodiac sign is endowed with many unique personality traits and characteristics. This means some of the zodiac signs are likely to get along, while other zodiac signs clash no matter what type of relationship they may have.

This zodiac compatibility is sometimes taken quite seriously in Chinese culture, predictions, more so than in western astrology. For example, when considering love, relationship, dating or marriage, many Chinese natives will still give consideration to how compatible their zodiac animal is with their partner or soulmate.

Want to know whether he/she is compatible with you? You can use our zodiac love compatibility calculator below and check…! 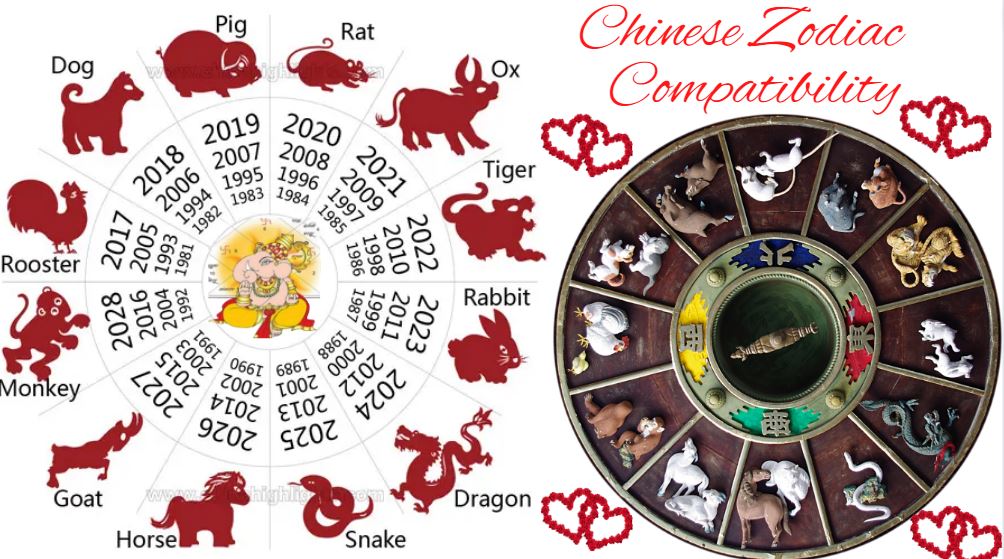 Which Chinese zodiac signs are compatible?

According to Chinese astrology compatibility and matching, the animal signs that are four years apart from each other are believed to be compatible. However, some are incompatible zodiacs if they are six years apart.

You can have a Chinese zodiac compatibility test using our compatibility chart or calculator between you and your soulmate / partner. 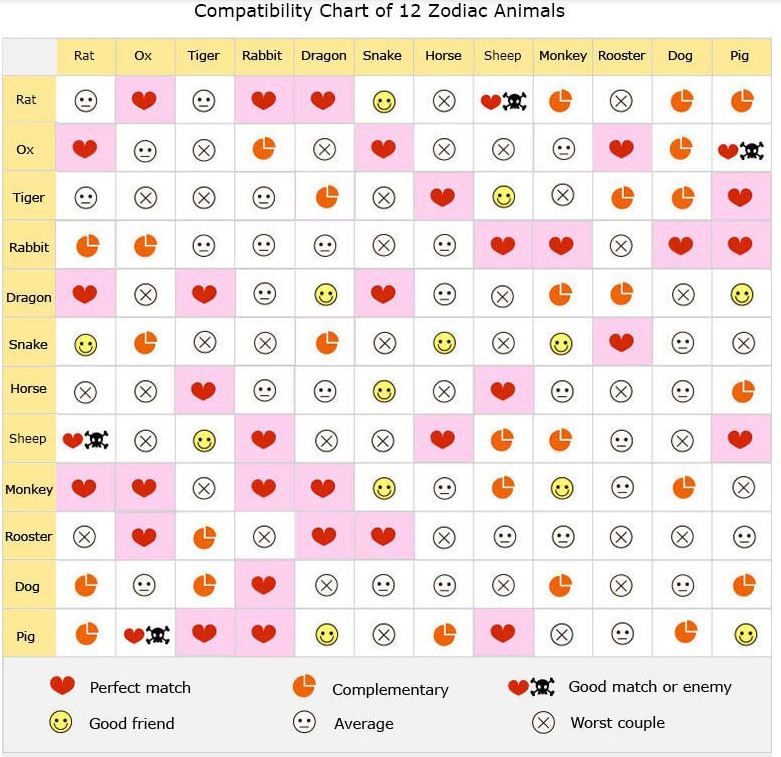 The 12 zodiac animal zodiac signs can be divided into four groups of three. The groups are based on the surmise that each of the three zodiac animals concerned have similar ways of thinking or temperament, or at least the style of thinking and understanding.

These zodiac natives are action oriented and show traits of intelligence. These zodiac born natives can complement each other intellectually and are compatible with each other.

These zodiac natives are deep thinkers and always very conscious about attaining their objectives. These people are complementary to each other in intellect and habits.

These natives who are born under Tiger, Horse and Dog zodiac signs incline to freedom and have strong sense of personal ego. These natives can understand each other but sometimes are egoistical.

These people love peace and believe in mutual cooperation and unity. These natives can be sympathetic and usually make great pairs.

As part of Chinese astrology, Chinese zodiac signs (animals) are also related to the Ying Yang and Wu Xing theories (the Five Elements). They are just opposite however supporting and generating to the other.

One can realize personal shortcomings and can easily learn from the positive attitudes of others as a complement.

This is the same as that the animal zodiac signs that are four years apart from each other are believed to be compatible.

Either Compatible or Incompatible:

The zodiac signs which are directly opposite to each other zodiac sign (i.e. 6-years apart). However, their relationship can be fine if the older yields to the younger one. For example, Rat and Horse zodiac signs.

Starting from one’s own zodiac sign as number one, the fourth signs either counted clockwise or anti-clockwise are very likely to be the non-compatible zodiac signs. i.e., these zodiacs are three years apart. For example, Rat vs Rabbit and Rooster animal signs.

How Does Zodiac Compatibility Work?

As you can see from the Chinese zodiac compatibility chart, there are various degrees of compatibility between the zodiac sign animals. These are determined and decided through several groupings known as the Three Harmonies, Six Harmonies, Six Conflicts, and Six Damages as well.

The 12 zodiac animals can be separated or divided into 4 groups of 3 that get along especially well. The three zodiac animal signs in each group make the best romantic zodiac matches. Because these zodiac signs tend to think similarly and value the same things in life.

These zodiacs also bring luck to each other with plenty of mutual understanding, love and adjustment. As colleagues, family members and friends, they will work well together as a team to reach the best outcome.

Unlike the 3 Harmonies who are more out-rightly zodiac compatible, these are six pairs of zodiac sign animals who can be mutually supportive and helpful. These zodiacs tend to lend a helping hand at pivotal moments in each other’s life and make the best couples or zodiac parents, colleagues, pair and friends. The Six Harmonies pairs are follow as:

These are 6 zodiac pairings, like the Six Harmonies. However, these zodiac pairs have opposite personalities and characteristics and tend to view everything in opposing ways. Precisely because of this, these zodiac pairs can share strong attractions and find the other person very intriguing from the beginning.

Even so, with such different views, ideas and thoughts on life. These zodiac natives may come together in a passionate, love and relationship for a while before ultimately separating.

The Six zodiac Conflict’s pairs are spaced 6 years apart, and include:

The Six zodiac damages take the Six zodiac Conflicts one step further. These zodiac pairs are so different that they are unlikely to ever see eye to eye or talk to each other. If they somehow end up in a love relationship, love, marriage or important partnership, these pairs will be prone to catastrophic fights, conflicts and damage their partner’s luck. The Six Damages are following as:

As shown on the chart, each zodiac animal belongs to any one of the five elements, which will make them either generating or overcoming together.

The most comprehensive consideration of zodiac compatibility is done through Bazi, which incorporates the exact time, location and date of each partner’s birth.