Chinese New Year 2023 will fall on Sunday 22, January 2023. The year 2023 is starting a year of the Rabbit. It is a public holiday, Chinese people will get 7 days complete off from work and business starting from January 21st to January 27th in 2023.

What is the Animal of Chinese New Year 2023?

Each year, the Chinese zodiac gives an animal sign. This year, the New Year 2023 is a Year of the Rabbit animal, more specifically, Water Rabbit, starting from 22 January, 2023, and lasting until 9 February 2024.

You can use our free Chinese horoscope 2023 tool to find your zodiac animal sign and check your horoscope in 2023 on our page Chinese zodiac. 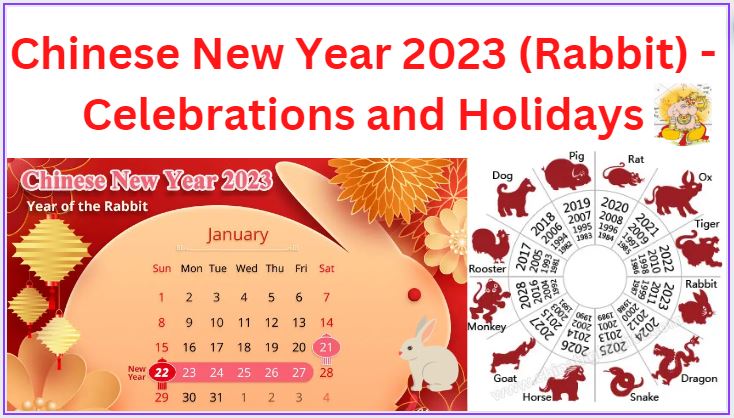 Why Does and Impacts of Chinese New Year Date Change Every Year?

The date is decided or calculated by the Chinese Lunar Calendar, which is based on the cycles of the sun and the moon which is generally 21 – 51 days behind the Gregorian calendar (internationally-used).

The Chinese New Year date changes every year, however, it always falls between January 21st and February 20th of each year. The day of Chinese New Year is a new moon day, which is usually the second after the winter solstice.

How Long is the Chinese New Year Holiday Generally?

China’s public holiday for Lunar New Year is a total of 7 days, from Chinese New Year’s Eve to the 6th day of the lunar calendar new year.

Offices, banks, schools, factories, shops, and most non-essential services will close doors for a week’s holiday. The large retail outlets and hotels stay open and may even be busier than usual.

The School holidays are over four weeks long and migrant workers abandon their factory and building and construction jobs for weeks to return home.

Holidays in Hong Kong, Macao, and all other Asian countries such as Malaysia, Singapore, Vietnam, and Korea are around 1 to 3 days.

The Celebrations of Chinese New Year will be traditionally celebrated for last for 16 days, starting from Chinese New Year festive to the Lantern Festival. The most notable dates of the Lunar New Year 2023 are these total 3 days:

Each day of the 16 day long festival has a name, and an assigned purpose or meaning or definition. Below is a table of all the important day and dates and their meanings.

Below are some common questions asked about new year.

New Year Celebrations last up to 16 days, however only the first 7 days are considered a public holiday there. (January 22nd to January 29th, 2023).

Chinese New Year 2023 marks the transition between zodiac signs: 2023 is the Year of the Rabbit.