In this page, we will walk you through all about 2023 Solar Eclipse. Also, this article explains you that When, Where and how to see Solar Eclipse. Let’s read more about Solar Eclipses that are going to happen in this year.

According to the NASA, this year 2023, Earth will experience two solar eclipses. What is Solar Eclipse is, a solar eclipse occurs when the Moon passes in between the Earth and the Sun. Read more about Solar Eclipse.

This type (rare) of eclipse is a combination of an annular eclipse and a total solar eclipse. “During the solar eclipse event, a “ring of fire” visible for a few seconds in the Indian and Pacific oceans, Western Australia (max 1 minute), Timor Leste (1 minute and 14 seconds) and West Papua (1 minute and 9 seconds).” Jamie Carter, science journalist, author and solar eclipse expert.

The second solar eclipse 2023 will be an annular solar eclipse on 14th October. The dazzling and sparking “ring of fire” will be visible to observers in North, South and Central America.

A solar eclipse occurs when the moon is positioned between the Sun and the Earth and casts a shadow over Earth. Solar Eclipse only occur during the phase of the new moon and make for an interesting sky-watching target.

14 October 2023 – The dazzling and sparking “ring of fire” will be visible to observers in North, South and Central America.

When the Solar Eclipse Happens Worldwide?

The solar eclipse starts at one part or location and ends at another location. The times given below are actual times in UTC)when the eclipse occurs.

What is solar eclipse? 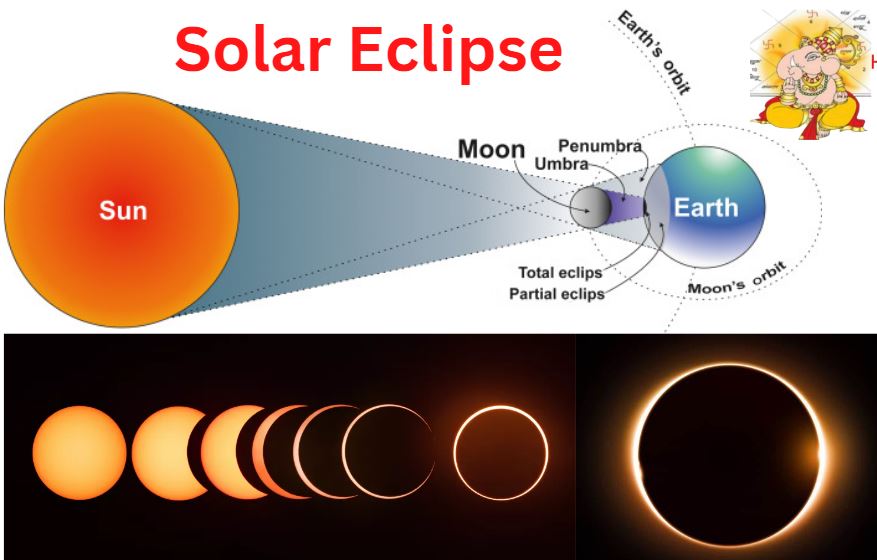 What happen during solar eclipse?

How does Solar Eclipse work?

As we know that the solar eclipse happens when the Moon passes between the Sun and Earth. When the Sun, the Moon and the Earth line up exactly, it causes a total solar eclipse. This is because the Sun’s diameter is 400 times that of the Moon. However, co-incidentally it is somewhat 400 times further away.

How to See / View a Solar Eclipse Safely?

How to see solar eclipse from your home?

Apart from eclipse glasses or viewer, people can also view the solar eclipse through a safe handheld (solar) viewer. Surya Grahan or Solar eclipse, does not have any other effect on the human body other than the eyes.

Can we directly see solar eclipse?

No, Never look at the Sun directly. Solar eclipses can be especially really dangerous for direct viewing because the sudden changes in luminosity do not give our eyes a chance to adapt. It is best and really safe if you have a pair of special glasses that have solar filters.