HoroscopeView » What are the Richest Zodiac Signs in the World?

Richest Zodiac Signs in the World

Most billionaires with Cancer zodiac signs saw their wealth increase by 35%, said the report. People who were born under Cancer sign had a great year, almost doubling their wealth, followed by Geminis, Taurus and Pisces zodiac signs.

Currently, the unluckiest zodiac star signs or poor zodiac signs are Gemini, Leo and Capricorn. As these zodiac signs saw their wealth decrease by 1-4% in the last one year. 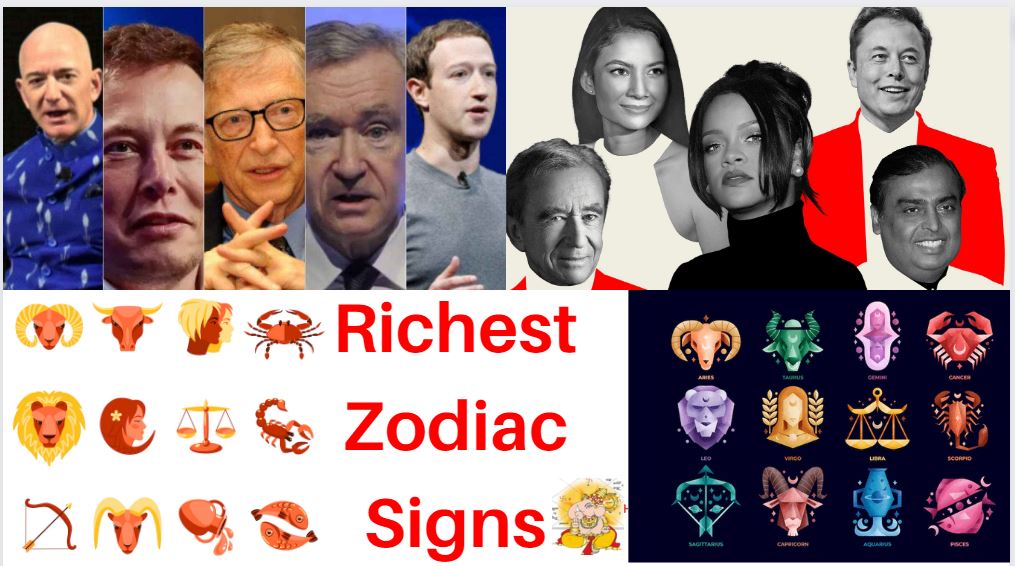 Scorpio and Virgo lead the way

When we concern about the most contributions made to the list, Scorpio and Virgo get the highest rank. Billionaires born under the both these zodiac star signs contributed 9.5% each to the total wealth in the list.

What are the Richest Zodiac Signs of Most to Least Billionaires in the World?

Every zodiac or star sign has some personality traits that make them stand out from the crowd. Therefore, whether you belong to a sensitive Cancer zodiac sign, a diplomatic Libra star sign, or a passionate Scorpio sign, your stars have the ability to predict everything from your most attractive trait to how your zodiac sign could impact your wealth and health.

The zodiac signs or star signs can tell which zodiac sign is most likely to become a billionaire. A study and research has found the most common zodiac sign among the wealthiest billionaires.

Richest Zodiac Signs with the Most to Least Billionaires

Below are the list of richest star signs listed as most to least billionaires.

Libra star sign is the top in the list that has 27 billionaires. Some of the most famous richest person names include designer and businessman Ralph Lauren, Walmart heiress Alice Walton, H&M chairman Stefan Persson and many more.

Pisces zodiac sign in the second place with 22 billionaires including the CEO of LVMH Moet Hennessy Bernard Arnault, Dell founder and CEO Michael Dell, and the founder of News Corp Rupert Murdoch.

The Cancer belong natives on the list has risen a lot over the past years, with 20 billionaires who belong to Cancer zodiac sign. Some of the biggest billionaire names include Heineken heiress Charlene de Carvalho-Heineken, entrepreneur Sir Richard Branson and Tesla Motors founder Elon Musk.

There are 20 Taurus zodiac natives in the richest billionaires list. These natives include Facebook founder Mark Zuckerberg and Koch industries VP David Koch.

There are 20 Leo born billionaires on the richest zodiac list. Some of the most famous names belonging to the Leo zodiac sign include Las Vegas Sands chairman Sheldon Adelson, Oracle founder Larry Ellison and Google founder Sergey Brin.

There are 15 Aries born zodiac billionaires on the list as well. These include India’s richest man Mukesh Ambani, Google co-founder Larry Page and much more.

There are 8 billionaires who were born under the Sagittarius zodiac sign. These lists include property tycoons Simon and David Reuben and Fidelity Investments CEO Abigail Johnson.

8 billionaires who were born under Capricorn star sign including the richest man in the world, Jeff Bezos. Some natives who belong to this zodiac sign include Russian entrepreneur Vladimir Potanin and Banco Safra chairman Joseph Safra.

From the list above, it is very clear that anyone can become the most successful or richest billionaire in their life with their hard-work and determination.

All you need to do is, you need to motivate yourself enough to start working towards your goals.

The Zodiac Signs Details of The Richest People in the World

Forbes often shares the list of highly successful people based on their age, gender, or their earnings. And just imagine what happens when you check the zodiac signs or star signs of the recent billionaires?

The star sign of RIL Mukesh Ambani who is the 2nd richest India, is Aries zodiac sign, This star sign too made a major contribution of 8.7 % to the overall wealth in the list. S.Gopalakrishnan of Infosys and Adi Godrej also belong to this star sign.

Thanks for reading and sharing richest zodiac signs details.