According to the Pisces horoscope predictions, the Pisces are known for being the zodiac’s hopeless romantic. People born under Pisces zodiac sign love being in love, and tend to give all their support, knowledge and skills to the relationship from the beginning. The Pisces natives believe in soulmates and are looking for one special person to share their life. When two people of the same Pisces zodiac sign first meet, it is a magical moment. Can two Pisces make a good relationship? Pisces and Pisces compatibility report gives you everything you need to know.

According to the horoscope by date of birth, joining two Pisces natives in a relationship can be described as a “merging of one.” The two fish or Pisces natives are all about dissolving boundaries, in their romantic relationships.

When two Pisces born natives join together, it can be a transcendental experience for both of them.

Generally, Pisces natives can be a little hard to know. According to astrology, Pisces is ruled by Neptune, meant for fantasy and illusion. Pisces natives are known for being big daydreamers who live in their own worlds. This is the main reason, people may have a hard time connecting to Pisces natives in the first meet. Two Pisces will have no problem getting each other.

Pisces natives communicate in an intuitive way, feeling connected and drawn together from the start.

Pisces and Pisces couples make an emotional pair that can either bring out the best of each other, sometimes it may bring the worst. While these zodiac partners can be emotionally loving, supportive to each other’s needs, they’re also jealousy, codependency and mood swings.

“This pair creates their own love story where only each other matters. Pisces-Pisces couple is addicted to love. They should learn how to create boundaries and stick to them is very important if they want to have a healthy, long-term relationship. 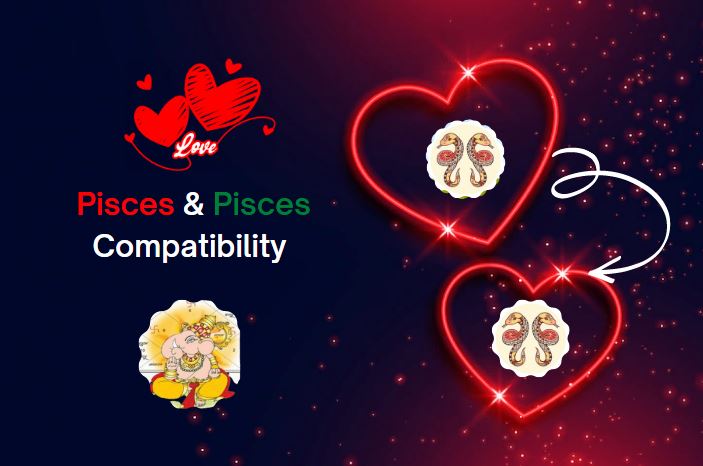 The Pisces Pisces love match is like a fairy-tale, perfect emotional and intellectual connection is something that no other zodiac sign can achieve with them. The way they care for each other is an example for people around them to follow.

Pisces changeable quality and nature will manifest through emotional changes and inconsistent behavior. But in a Pisces and Pisces Love relationship, their rapport is good that they will naturally know to maintain a distance to prevent the equation from getting boring.

Pisces – Pisces make an excellent match in sexual relationship. According to free love horoscope predictions, Pisces is the one place, Jupiter and Venus are both in a good position. The connection of Venus and Jupiter in Pisces gives the natives access to a lot of pleasure to emotional and sexual connection,” she says.

Pisces zodiac signs get a lot of pleasure from pleasing their partner. So Pisces-Pisces is a pairing that’s very selfless and giving. Both will discuss more about their sexual fantasies and will try to make things happen.

According to the love astrology, servicing and pleasuring through sex is another form of sharing their love. Sex for two Pisces zodiac sign is a way for them to merge physically, spiritually and emotionally.

The Pisces & Pisces sexual compatibility works like magic. The problem is it will take more time and trouble. Though both are such a perfectly matched couple, and can converse quite easily, they have difficulties and trouble making the first move when it comes to matters of sex.

Besides, emotionally close, they feel that having sex may spoil their relationship and emotional rapport. So they just want to let things drift. However, when they are in the sexual relationship, they will understand each others.So the Pisces compatibility in bed truly beautiful.

Emotionally, the combination of Pisces and Pisces work as both are sensitive water signs who aren’t afraid of their feelings. These are two natives who are vulnerable with each other.
Pisces natives will fall in love relationships really fast, especially if Pisces natives feel a spiritual pull towards someone. This is a main reason that they can form a deep bond right away and end up sharing things.

As both are mutable signs, they’ll have an understanding of each other. As long as they aren’t being moody, they shouldn’t have any major problems.

Overall, two Pisces natives know how to make the other partner feel truly loved and cared for. 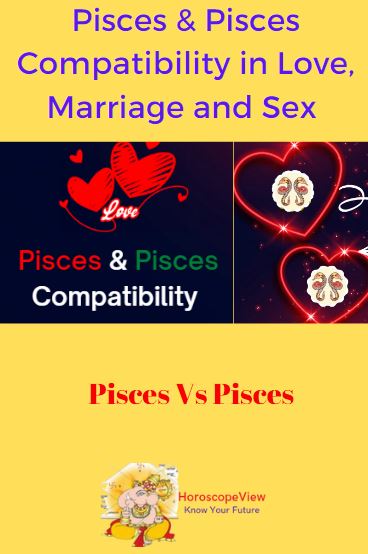 According to the Pisces-Pisces romantic relationship, trust is a very difficult subject. Their main problem is, they know each other too well. Both can recognize their own unstable and unreliable nature in their couple. So rather than building trust, they will easily get caught in a circle of attempts to be honest and dishonest.

The easiest way to create a safe and trustful relationship or atmosphere is through a lot of meaningful communication.

As Pisces natives exalting Venus, it is difficult for them to speak about their values while they are in a relationship. Pisces natives will both value talent, one’s ability and the flexibility someone has in the outer world.

Still, two Pisces couples might realize that they don’t share the same values when they are together. The problem here is, they are too alike and they will wake each other’s deficiencies. This is the main problem that will lead to misunderstandings and the conviction of both partners. Their values do not differ much, but their priorities might be different.

While one of these partners might appear at the agreed point in time, the other partner will get lost. If they manage to find each other, they might move in opposite directions and be unaware of the fact they didn’t talk to begin with.

Generally, Pisces and Pisces’ shared activities are dependent on their physical contact. If they have it, they could hold hands so as not to get lost.

Overall, when two Pisces partners join together, they will have trouble trusting each other. Pisces changeable natures will shift their relationship often. If they share enough love, they can handle the changes and stay together.

Mostly, they will not fall in love, because of their inner need to inspire their partner. They don’t need this from each other, as both inspire themselves. If love and romantic relationships happen between Pisces and Pisces partners, they have an actual fairy tale story, and an everlasting love.