HoroscopeView » Moon Phase 27 January 2023 – What is the Moon Phase for Today? 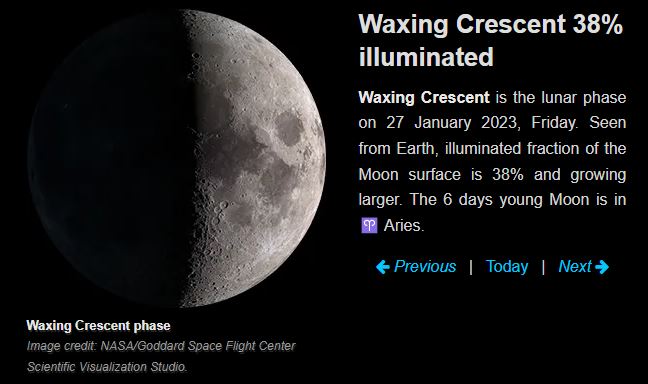 Today, the Moon will be in a Waxing Crescent Phase. Best seen in the west after the sun dips below the horizon at sun-set. This is the first mooon Phase after the New Moon and is a great time to see the features of the moon’s surface. The moon is close to the sun in the sky and mostly dark except for the right edge of the moon which becomes brighter as the days get closer to the next moon phase which is a First Quarter with a 50% percentage illumination.

The Waxing Crescent on January 27, 2023 has an illumination of 38% percentage. This is the percentage of the Moon illuminated by the Sun. The illumination is constantly changing and can vary up to 10% percentage a day. On January 27th 2023, the Moon is 6.24 -days old. This refers to how many days it has been since the last New Moon. It takes 29.53 -days for the Moon to orbit the Earth and go through the lunar cycle of all 8 Moon phases.

Moon is passing about ∠24° of ♈ Aries tropical zodiac sector.

There is medium ocean tide on this date. Sun and Moon gravitational forces are not aligned, but meet at very acute angle, so their combined tidal force is moderate.