HoroscopeView » Moon Phase 21 January 2023 – What is the Moon Phase for Today?

Today the Moon will be in a New Moon phase. This phase is easily viewable just before the sunrise in the western sky. In this phase the Moon’s illumination is growing little bit smaller each day until the New Moon. During this part of the Moon cycle, the Moon is getting very closer to the Sun as viewed from Earth and the night side of the Moon is facing the Earth with only a small edge of the Moon being illuminated today. 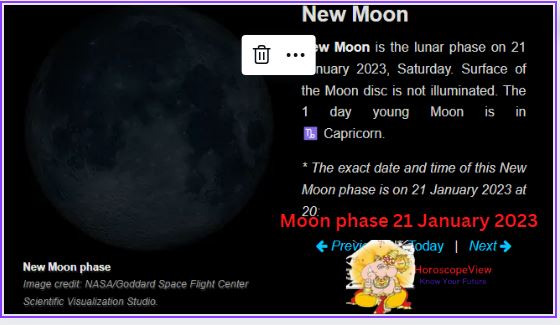 On this day 21st January 2023, the Moon will be in a New Moon phase. During this phase the Moon is too close to the sun in the sky to be visible. The moon-rises and sets with the sun and is not present in the night sky. Because of this the night sky is darker and an excellent time to view other celestial objects. Like the Full Moon, a New Moon happens at a very specific time when the sun and moon have the same ecliptic longitude and it can be measured down to the second it occurs.

This refers to how many days it has been since the last New-Moon. It takes 29.53 –days for the Moon to orbit the Earth and go through the lunar cycle of all 8 Moon phases.

New Moon is the lunar phase on Saturday, 21st January 2023, Surface of the Moon disc is not illuminated. The 1 day young Moon is in ♑ Capricorn.

Moon rises at sunrise and sets at sunset. It’s part facing the Earth is completely in shadow.

Moon is leaving the last ∠4° of ♑ Capricorn tropical zodiac sector and will enter ♒ Aquarius later.

Lunar disc is not visible from Earth. Moon and Sun apparent angular diameters are ∠1973″ and ∠1950″.