HoroscopeView » Moon Phase 16 January 2023 – What is the Moon Phase for Today?

Moon Phase January 16, 2023, On this day the Moon phase will be in a Waning Crescent phase. This moon phase is best viewed just before the sun-rise in the western sky. In this phase the Moon’s illumination is growing smaller every day until the New Moon.

It can be a great time to see the best features of the Moon’s surface. Along the edge where the illuminated portion or parts meets the dark side, the craters and mountains cast long shadows making them very easier to observe with a telescope or binoculars. 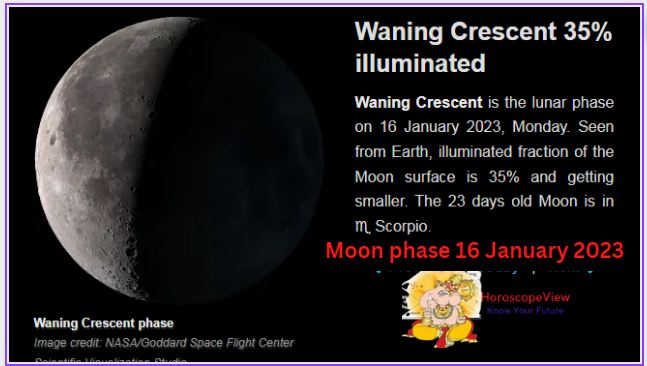 The Waning Crescent on 16th January 2023 has an illumination of 35% percentage. This is the % percentage of the Moon illuminated by the Sun. The illumination is constantly changing and can vary up to 10% a day. On Jan 16 2023 the Moon is 23.55 –days old.

This means and refers to how many days it has been since the last New Moon. It takes 29.53 –days for the Moon to orbit the Earth and go through the lunar cycle of all 8 Moon phases.

Waning Crescent is the lunar phase on January 16th 2023, Monday. Seen from Earth, illuminated fraction of the Moon surface is 35% percent and getting smaller. The 23 –days old Moon is in ♏ Scorpio.

Moon-rises after mid-night to early morning and sets in the afternoon. It is clearly visible in the early morning low to the east.

The Moon is clearly passing about ∠13° of ♏ Scorpio tropical zodiac sector.

Thanks for reading and sharing Moon Phase 16th January 2023.