HoroscopeView » Moon Phase 15 January 2023 – What is the Moon Phase for Today?

Moon Phase: January 15, 2023 – On this day 15th January 2023, the Moon will be in a Last Quarter moon phase. This moon phase occurs roughly 3 weeks after the New Moon when the Moon is 3 quarters of the way through its orbit around the earth.

Also called a 3rd Quarter phase, it will rise around mid-night on the eastern horizon and set in the west around noon the next-day. In the days following the 3rd Quarter Phase the Moon’s illumination will decrees each day until the New Moon. 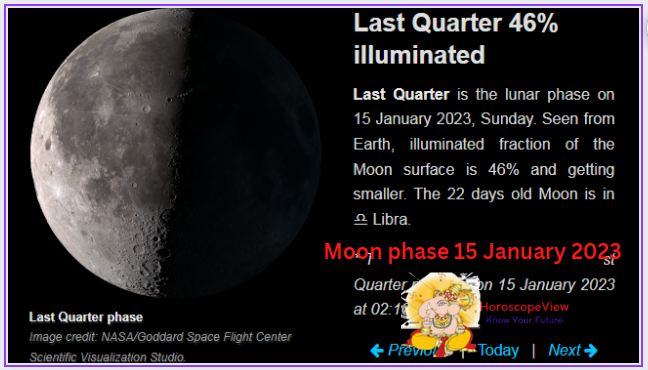 The Last Quarter on January 15th 2023 has an illumination of 46%. This is the percentage of the Moon illuminated by the Sun. The illumination is constantly changing now and can vary up to 10% percentage a day.

The Moon rises at midnight and sets at noon. It is visible to the south in the morning.

Thanks for reading and sharing this Moon phase 15th January 2023.