HoroscopeView » Moon Phase 12 January 2023 – What is the Moon Phase for Today?

The Moon’s current phase for today 12th January and tonight is a Waning Gibbous. During this moon phase the Moon can be seen in the early morning daylight hours on the western horizon location. This is the first moon phase after the Full Moon occurs.

It lasts roughly at least 7 days with the Moon’s illumination growing smaller each day until the Moon becomes a Last Quarter Moon with an illumination of 50%. The average Moon rise for this moon phase is between 9 PM and Midnight depending on the age of the phase.

The moon rises later each night, setting after sunrise in the morning. 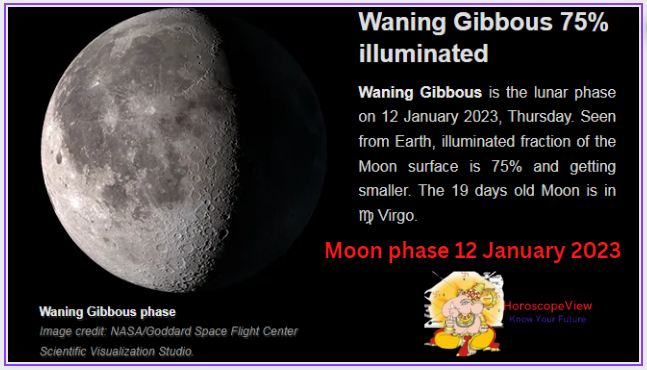 The Waning Gibbous on 12th January has an illumination of 75%. This is the % percentage of the Moon illuminated by the Sun. The illumination is constantly changing and vary up to 10% a day.

On 12th January 2023 the Moon was 19.72 days old. This refers to how many days it has been since the last New Moon occurs. It takes at least 29.53 days for the Moon to orbit the Earth and go through the lunar cycle of all 8 Moon phases.

There are a total of 8 lunar phases the Moon goes through in its 29.53 days lunar cycle. The 4 major and common Moon phases are such as Full Moon, New Moon, First Quarter and Last Quarter. Between these major moon phases, there are 4 minor ones as well.

The Waxing Crescent, Waxing Gibbous, Waning Gibbous and Waning Crescent. For more info on the Moon Cycle and on each moon phase check out Wikipedia Lunar Phase page.

Moon rises in the evening and sets in the morning as usual. You can view this southwest and it is high in the sky after midnight.

The Moon is passing about ∠22° of ♍ Virgo tropical zodiac sector.