HoroscopeView » Astrology vs Astronomy – What is the difference between Astronomy & Astrology?

Astronomy vs Astrology Meaning and Difference – Astrology and Astronomy are both concepts related to the universe. In the early ages, astronomy and astrology terms used indistinguishably. These two concepts were individually separated gradually from the 17th century onwards until they were declared to be independent of each other.

Though the practices of astronomy and astrology have common roots, there is an important distinction in astronomy vs astrology today. Astronomy is the study of the universe and its contents outside of Earth and its atmosphere. Astronomers examine the celestial objects’ positions, motions, and properties.

Astrology attempts to study how those motions, positions, and properties affect people and events on Earth. For several millennia, the desire to develop and improve astrological predictions was one of the main motivations for astronomical observations, concepts and theories. 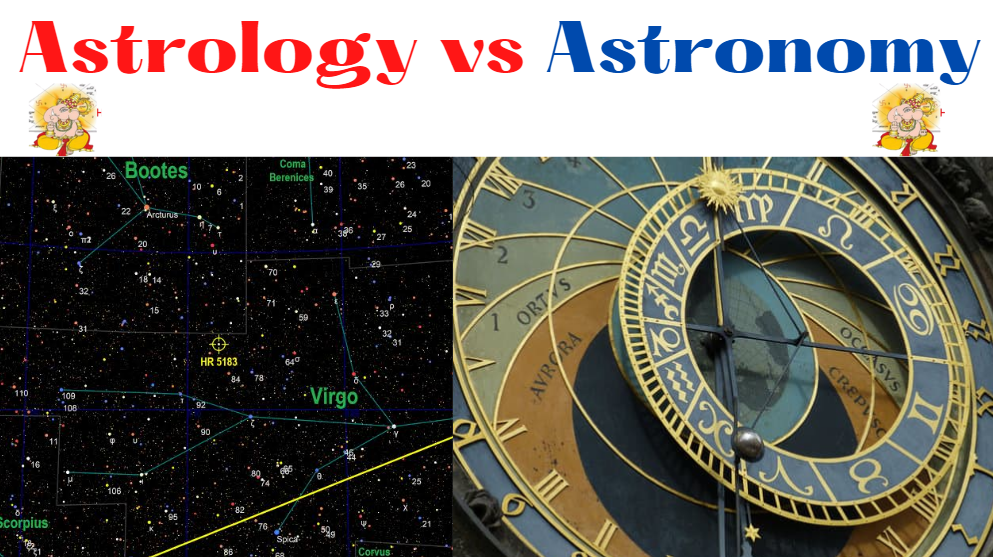 What is the difference between Astronomy and Astrology?

Astronomy is a science that studies all about outside of the earth’s atmosphere, such as planets, stars, galaxies, asteroids, and the properties and relationships of those celestial bodies.

Astronomers base their studies on observation and research. Astrology is the belief that the positioning of the planets and stars affect the way events occur on earth. If you’re really interested in the solar system and the planets, other celestial objects such as asteroids and comets, other galaxies and the (rest of) the universe, what makes up space, and the possibility of alien life or space travel, astronomy is the field you’re considering.

Astrology continued to be part of mainstream science till the late 1600s, when Isaac Newton demonstrated some of the physical methods by which celestial bodies affect each other. In doing this, he showed that the same laws that make, say, an apple fall down from a tree, also apply to the motions of the celestial sphere.

Since that time, astronomy has evolved into a completely separate field, where predictions about celestial phenomena are made and tested using the scientific process method. In contrast, astrology is regarded now as a pastime and a pseudoscience — though more people around the world still invoke advice from astrologers, experts and astrology publications in making important professional, personal experiences and medical related.

Is Astrology a science?

Through scientific tests, research and examination, astronomy means to assist people to better understand and analyse the universe and divine articles through perception and research. As a multidisciplinary field, there is a sum of 17 sub-disciplines. Huge progress has been made and thanks to the use of innovative strategies, ideologies and communication across different academic spheres.

Astronomers direct this broad testing and research using specialist computer programs and measuring wonderful tools. Telescopes and satellites are generally used to dissect and gather information from the universe.

There is a lot of research, arguments and discussion about whether astrology ought to be viewed as a real part of a science or deemed merely mystical subject. Given the name “Mother of all sciences,” the focal thoughts and ideas of astrology are taken from hypotheses that go past the domains of logical research and examination.

Astrology incorporates a few components and accessories of genuine science, such as specific vocabulary, maths, science and puzzling graphs. In spite of this, mysterious thoughts and speculations have little legitimacy.

Astrologers don’t differentiate between differing cases using current things and logic. These contentions spin around the idea of power and energy strategies, like yoga and Feng Shui, which likewise have negligible logical support. With little proof and with prominence given to superstition and fantasies, astrology concept falls under the umbrella of pseudoscience.

Star Map in Astrology and Astronomy

A star map or star diagram are guides of the night sky. Algorithms map the alignment of the stars on any given time and date. Astronomers partition these into several frameworks to render the findings, discoveries more effective.

They are used to distinguish and find the groups of stars and cosmic items, such as stars, nebulae, and galaxies. Note that a star graph contrasts from a galactic, which is a posting or arrangement of cosmic articles for a reason. Devices using a star diagram incorporate the plan and astrolabe sphere.

Numerous Native American clans of the Great Plains, notably the Shoshone, Arikara, Pawnee, and Wichita, had difficult convictions which incorporated the use of a star chart and astrology. Clans, such as the Cherokee, accepted that everything on the planet is an earth impression of the stars.

The Pawnee believed that stars were gods who once lived on Earth and afterward they were changed into stars at their death. Comets, showers of shooting stars and novas were seen as signs of extraordinary bad thoughts or disasters.

There are photos of a Pawnee Star and chart with unmistakably conspicuous heavenly body designs. Rather than estimating the area of stars to ascertain an area the Native Americans mapped the area of heavenly bodies and stars in the Star Chart and Astrology charts to flag occasions & seasons of the year.

As space instruments and technology improve and we can see ever further into space, astronomers are making new discoveries at an unprecedented pace.

Astrology, despite its lack of logical evidence, proofs or scientific proof is undergoing a parallel rise in popularity and significance in the popular sphere. All we humans will forever be fascinated by the stars.