HoroscopeView » 27 December Birthdays & What is Special On this Day Dec 27?

27 December Birthday – In this post, you will read all about the 27 December born famous personalities, celebrities and popular events.  In this article, you will get more information about Special days in December 27, such as, Anniversary of Benazir Bhutto’s Death, International Day of Epidemic Preparedness, Make Cut-Out Snowflakes Day, National Abigail Day and more.

Let’s ready to read all about 27th December Birthdays & Why December 27 is a Special Day?

December 27th is the 361st day of the year and 362nd day in leap years in the Gregorian calendar. It has 4 days remaining until the end of the year. Here are some of the popular people celebrating birthdays Dec. 27 today, including Maya Benberry, Nick Chubb, Kamri Noel McKnight, Louis Pasteur and more.

On this Day December 27

On this day today December 27th,

Below are the special days on December 27th, 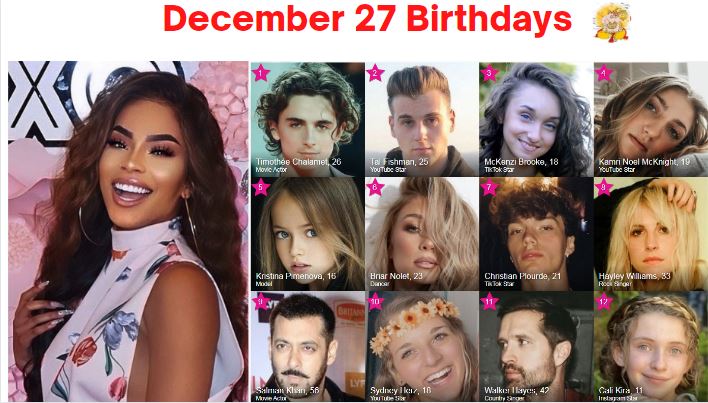 What is the zodiac for December 27?

We have provided all information that are related to December 27 birthday born in terms of popular celebrities birthday, historical events, zodiac traits for the people born on this day.

Thanks for reading and sharing December 27 famous birthdays and historical events related.