HoroscopeView » 18 February Birthday & What is Special On this Day Feb 18?

18 February birthday – In this post, you will read all about the 18 February born famous personalities, celebrities and popular events.  In this article, you will get more information about Special days in February 18 including, Cow Milked While Flying in an Airplane Day, Gambia Independence Day, Independence Day Gambia, Isra and Mi’raj, Maha Shivaratri, Maha Shivratri, Maja Shivaratri, National Battery Day and more.

Let’s ready to read all about 18th February Birthdays & Why February 18 is a Special Day?

February 18 is the 49th day of the Gregorian Calendar year. There are 316 days remaining until the end of the year (317 days in leap years).  Let’s see more about 18 February birthday natives. Here are some of the popular people celebrating birthdays Feb 18, including, Dr. Dre, Cybill Shepherd, Ike Barinholtz, Matt Dillon, Regina Spektor, Isabel Leonard, John Travolta, and Yoko Ono. 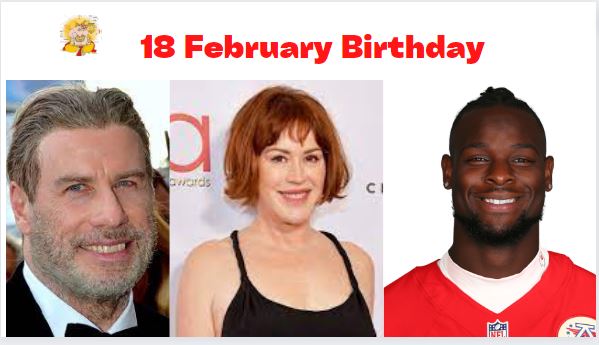 On This Day February 18

What Happened On February 18

What is the zodiac sign for 18th February Born?

We have provided all information that are related to 18 February birthday born in terms of popular celebrities birthday, historical events, zodiac traits for the people born on this day.

Thanks for reading and sharing February 18 famous birthdays and historical events related.